After tide-pooling at both Beach 4 and Rialto Beach, Ruby Beach was the other which was highly recommended most often to us in Olympic National Park, and it ended up being our favorite of the trip.  If you only have time to do one, this is it!

This is the northernmost of the southern beaches along the coast of Olympic NP.  It is named for the red minerals, called “almandite” (a type of garnet) found in the sand there.  While pretty, this ruby color does not stand out as much as we expected it to and we may not have even noticed it if we weren’t looking for it.  In all fairness though, that would likely be due to the entirety of the scenery being so striking overall, it was hard for these colors to stand out from the glorious total picture!

The beach from every angle was awe-inspiring.  It was easy to walk and not too sharp or rocky, and we saw more sea stars (aka starfish) at this beach than any other.  (If you want to read about Beach 4 and Rialto Beach, please check out our Trip Journal Day 26 and Day 27 from June 16th and 17th… we are trying to work in more blog posts instead of just the Trip Journal, but the Journal was all we’d done so far for our extensive 7 week trip in Summer of 2021.)

The hike down to Ruby Beach was relatively easy, and you can get to great tide-pooling spots much quicker and easier than dealing with distance or obstacles we found at Rialto and Beach 4.  A path down through the forest feels like a tunnel with tall walls of shrubbery guiding you through the maze from the road down to the beach where you finally emerge from the brush into photogenic perfection.

There are still a few driftwood areas to climb over that make beach likely inaccessible to those with mobility issues, but they were generally short and not that hard, or certainly not AS hard in comparison to what we’d seen at the other beaches, so of the three, this one would still be doable for most people other than those who may be bound to a wheelchair.  After the initial driftwood scramble, the rest of the beach is largely open.  You will have other rock formations to climb and explore, but there is still plenty to see if you don’t want to do much more climbing and rock tackling.

As with other beaches, be prepared to get wet and we recommend beach/wet shoes to help your grip and step over sharp rocks or other objects, though again, this was the beach we found water shoes least crucial (vs. Rialto or Beach 4).

Tip: As with any tide-pooling… Time your trip to get there about an hour before low tide so that you have a solid hour or two of great sightseeing while the water is still low.  Later than that and you’ll really have to pay attention not just to where you are, but your route back as well, so that you don’t end up getting stuck in water deeper than you intended or are comfortable with.

Ruby Beach is sometimes said to be the most beautiful of all the beaches.  We might slightly lean towards Rialto as the most beautiful, but that’s kind of like judging the best piece of art in a museum, the competition is tough, it may depend a bit on circumstances (like weather) that may change day to day, and no matter what, we found all of the views at all of the beaches on the Olympic Peninsula breathtaking in their own unique ways.

Ruby Beach has the stark driftwood characteristic of the area as well as lush green slopes leading up to the higher ground all around it, and of course the dramatic blues of the wavy Pacific Ocean and the vast sky it connects with and reflects.  What is also special for the area (for those of us more used to the vast open shores of the Gulf of Mexico) are the beautiful sea stacks and rock formations that stand tall above the crashing sea.  These rocky islands of sorts have dramatic shapes, even occasional archways, and green trees and plants on the top of some which stay above water, while their bases are covered with sea creatures around every curve.

We explored around a number of rocks and tidepools along the beach, but the largest “island” sea stack was our main goal, and it did not disappoint.  We did find that the water flows deeper around and through certain rocks and I was surprised a few times to step deeper than expected so we made sure to tell the kids they weren’t allowed to step in any water where they couldn’t see the bottom, that assured us that they would never go in more than a foot or two deep, as you can never be too cautious with the rip currents and tides of the area.

We’d seen some starfish and anemones along the way, but getting to the largest sea stack and the many boulders around its base offered a plethora of surprises and adventures at every turn.  We looked down around and inside every boulder and crevice… sometimes climbing higher and looking down, or turning to look from a different angle and enjoyed spotting well over 100 sea stars.  That said, this is apparently a greatly diminished number from years ago when the area was literally covered (a ranger showed us pictures to prove it) with sea stars!

There has been a dramatic drop in the sea stars community along the Pacific Coast due to Sea Star Wasting Disease in the previous years, which basically suffocates the sea stars and has been brought about from higher water temperatures as part of global warming.  There are mixed reviews on if sea stars are recovering from this pandemic that began around 2013, or that maybe some sea stars are immune to the disease.  We are not the experts and haven’t done the research to say, but we were glad to see as many sea stars as we did and certainly hope that these will remain and hopefully even more can come back, but, when in doubt, and as with so many other national parks particularly feeling the effects of climate change (we’re looking at you Glacier!) it’s probably better not to procrastinate too long before planning some of these trips if there are things you really want to see before they may be gone.

On our trip we had heard that tides were even a bit lower than usual when we visited, so it is worth noting that many of the sea stars and creatures we saw right at or below the waterline may not always be visible, but we still feel like there’d be quite a good amount to see even with waters a bit higher.

As the water started to rise again after low tide, and we needed to move on to our next destination, we slowly began to leave this favorite beach, hoping our hundreds of photos would do justice, we headed back to the green slopes leading up and off the beach.  A moment of panic hit when we realized, despite being able to see the parked cars along the road up above us, we couldn’t really see where we’d come out of the seemingly dense foliage.  We started watching other people to see where they were coming from and eventually found the small opening leading us back into the maze of vegetation that would lead us back to our car and inland for our next few days in the majestic and diverse Olympic National Park.

Please leave us a comment below to let us know your thoughts as we are still continuing to build this site and want to be as helpful to you, our readers, as possible. We’d love your feedback! If interested, please enjoy a few more pictures from our visit below. 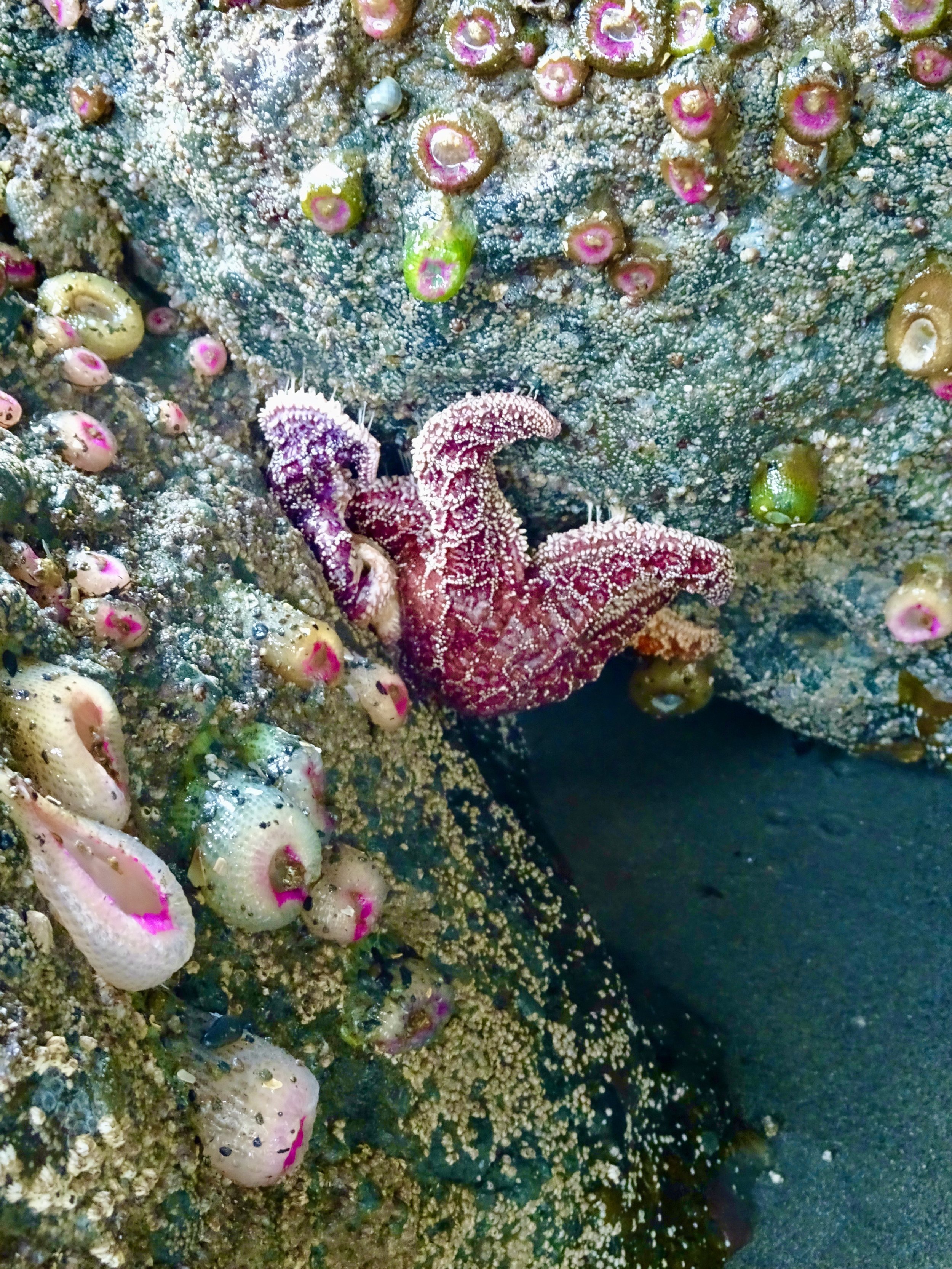 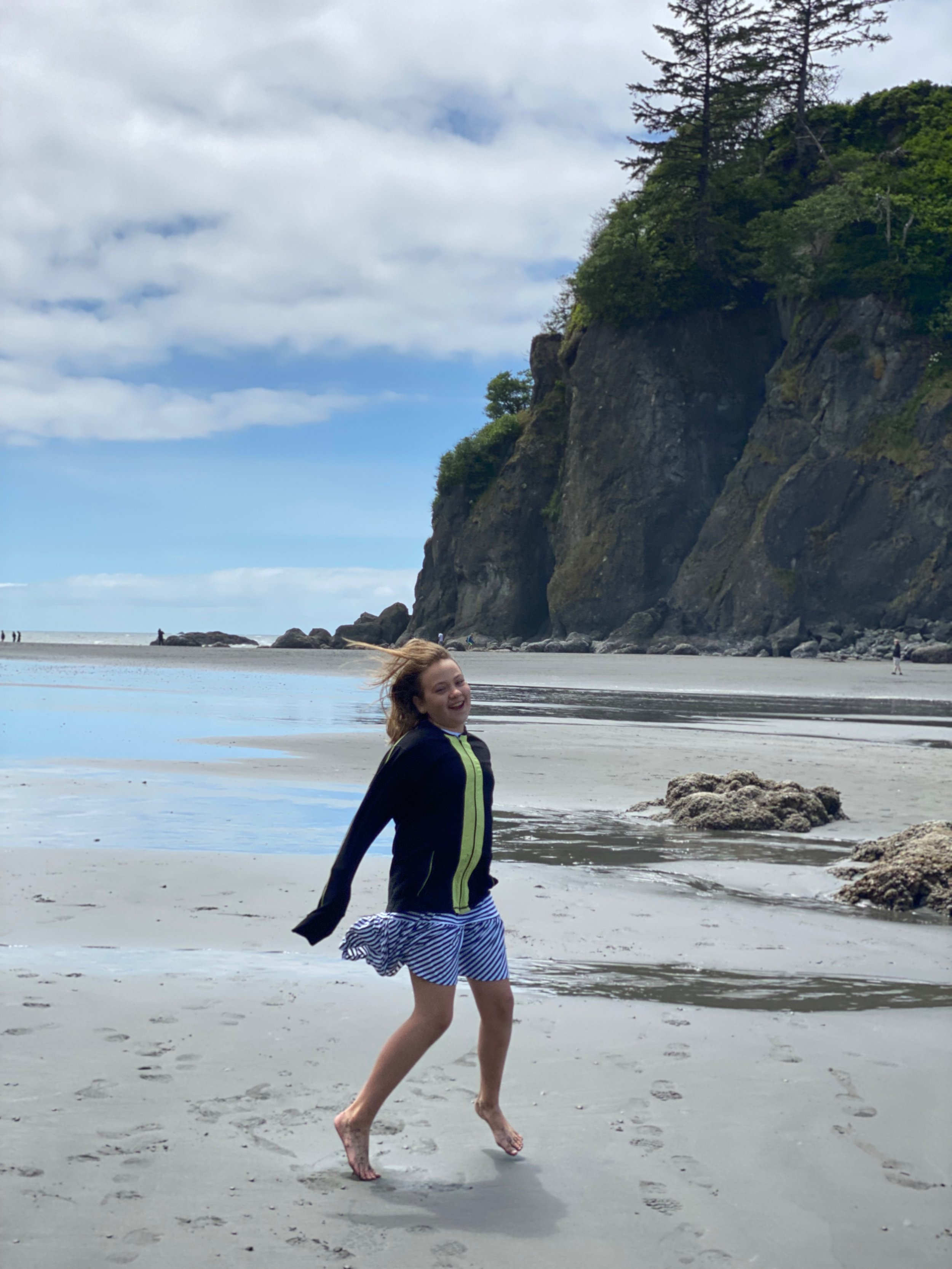 Total joy leads to spontaneous dancing on the beach. These are the moments we live for. Photo by Karen Boudreaux, 6/18/21 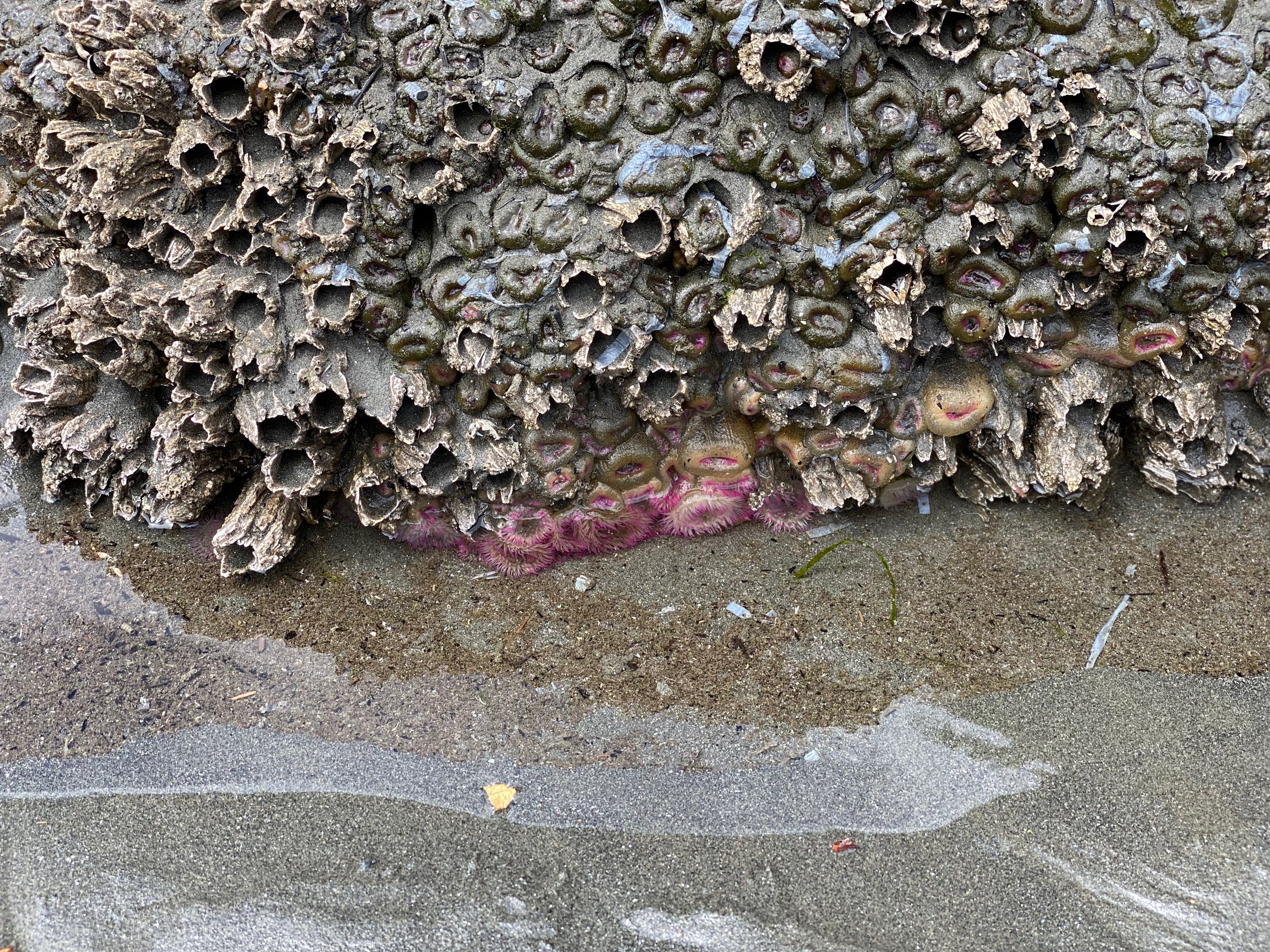 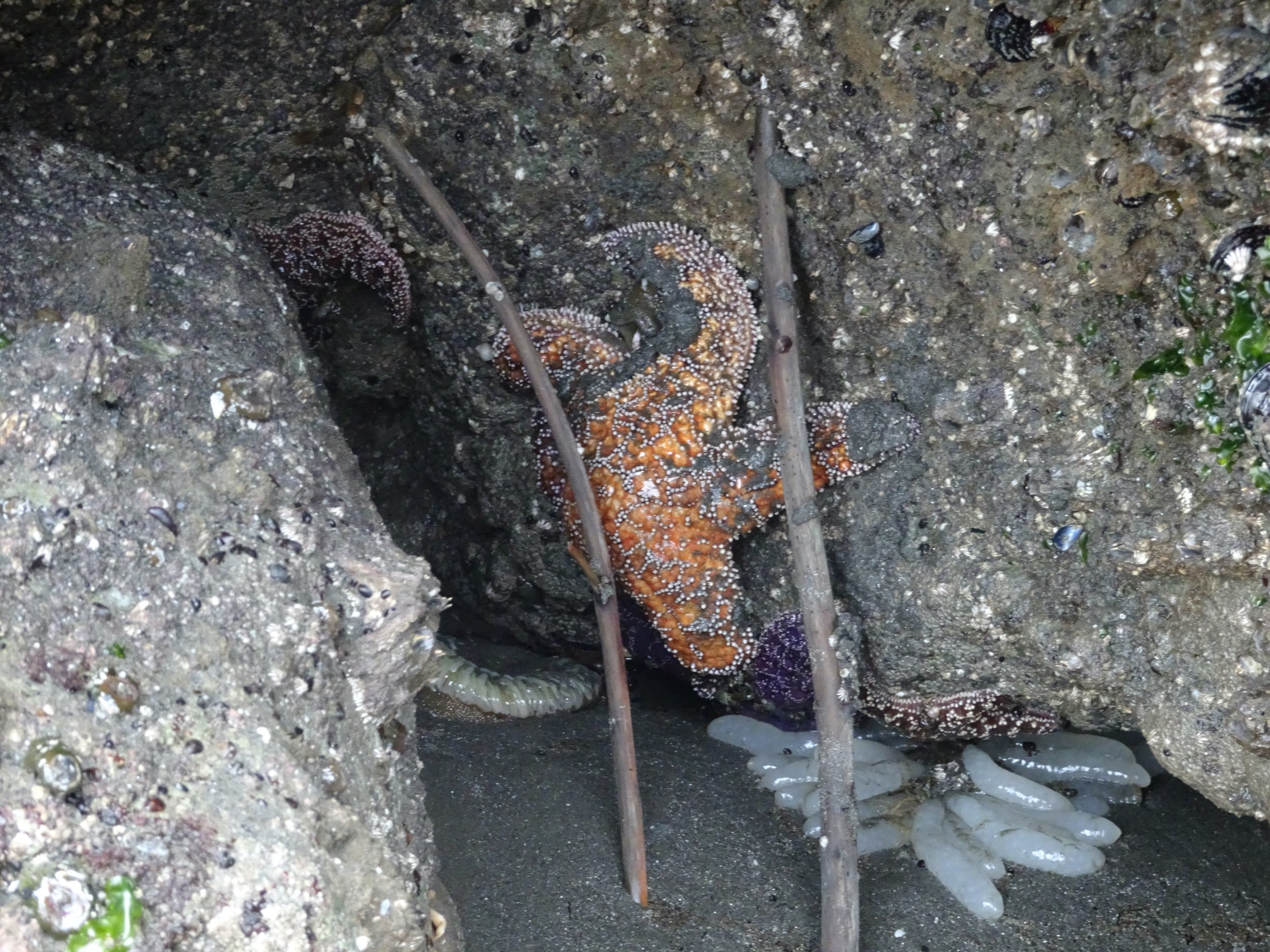 A sea star appears to be imprisoned by sticks above white pods of squid eggs. Photo by Karen Boudreaux, 6/18/21 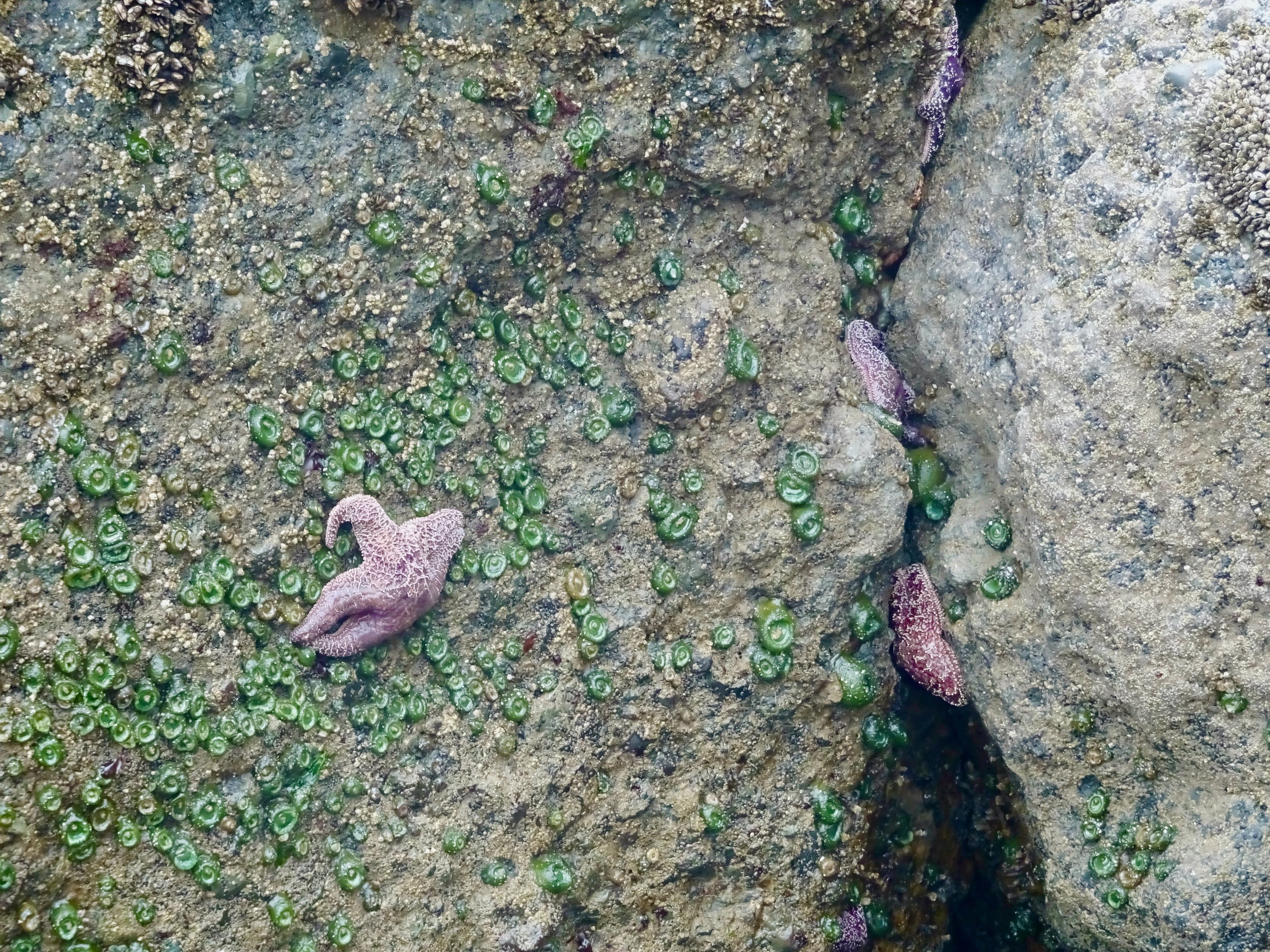 These sea stars are just as likely on open walls as crammed into tighter spaces. Photo by Karen Boudreaux, 6/18/21 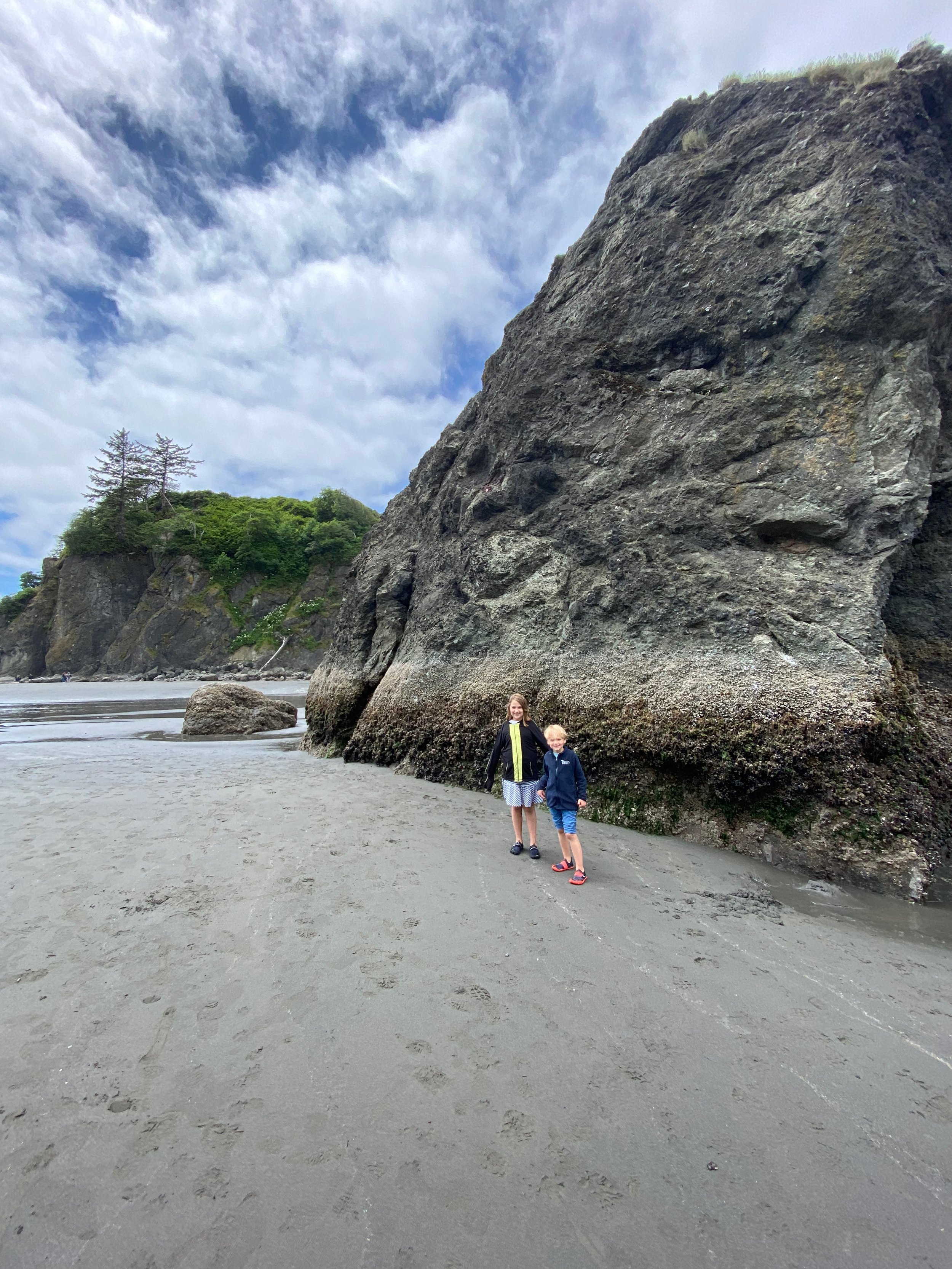 The kids stand tall below the water mark from high tide. Photo by Karen Boudreaux, 6/18/21 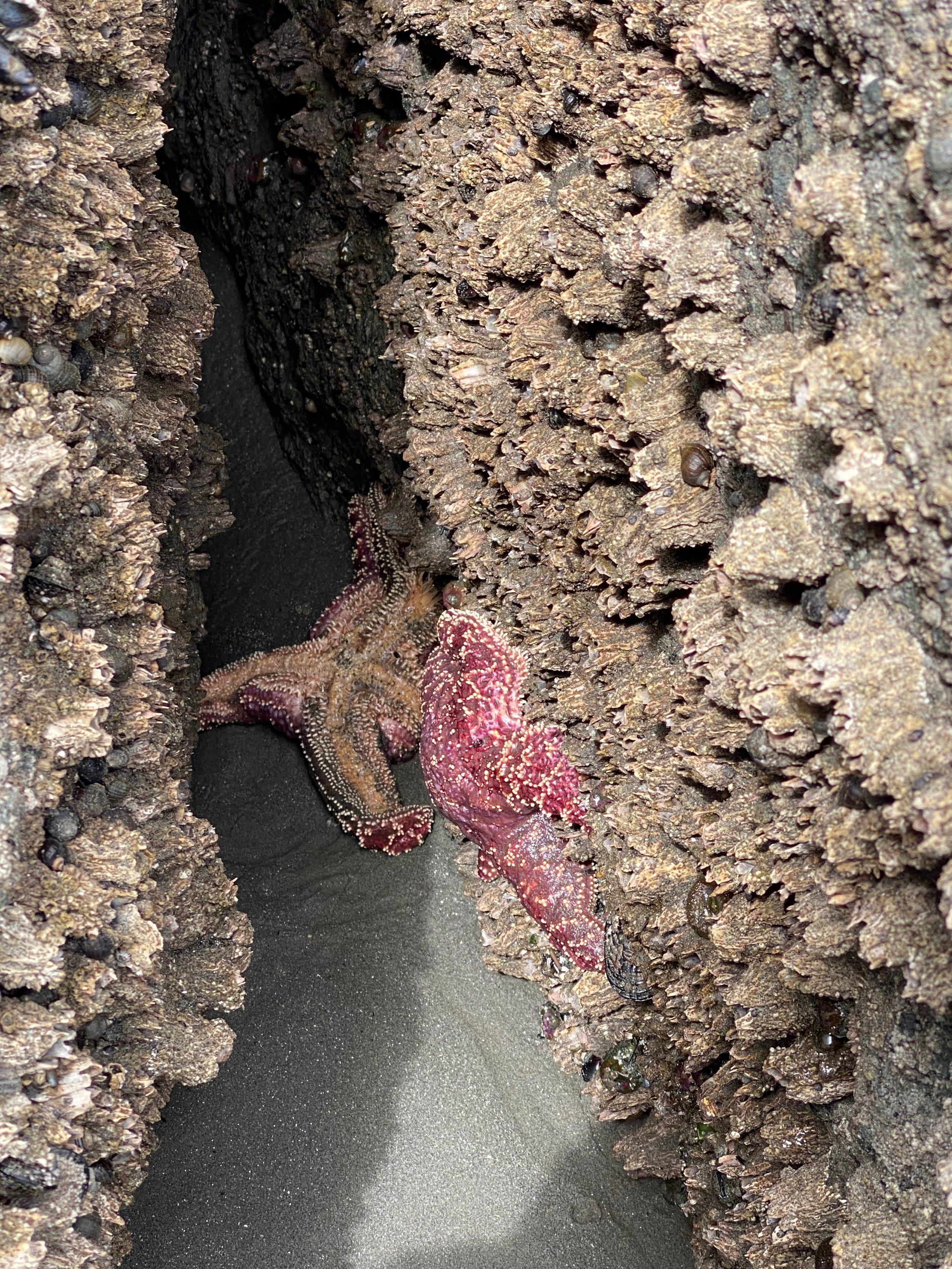 4 weeks into our trip and with full appreciation for all of our experiences, I can also relate to that sea star in the back… utter exhaustion! Photo by Karen Boudreaux, 6/18/21 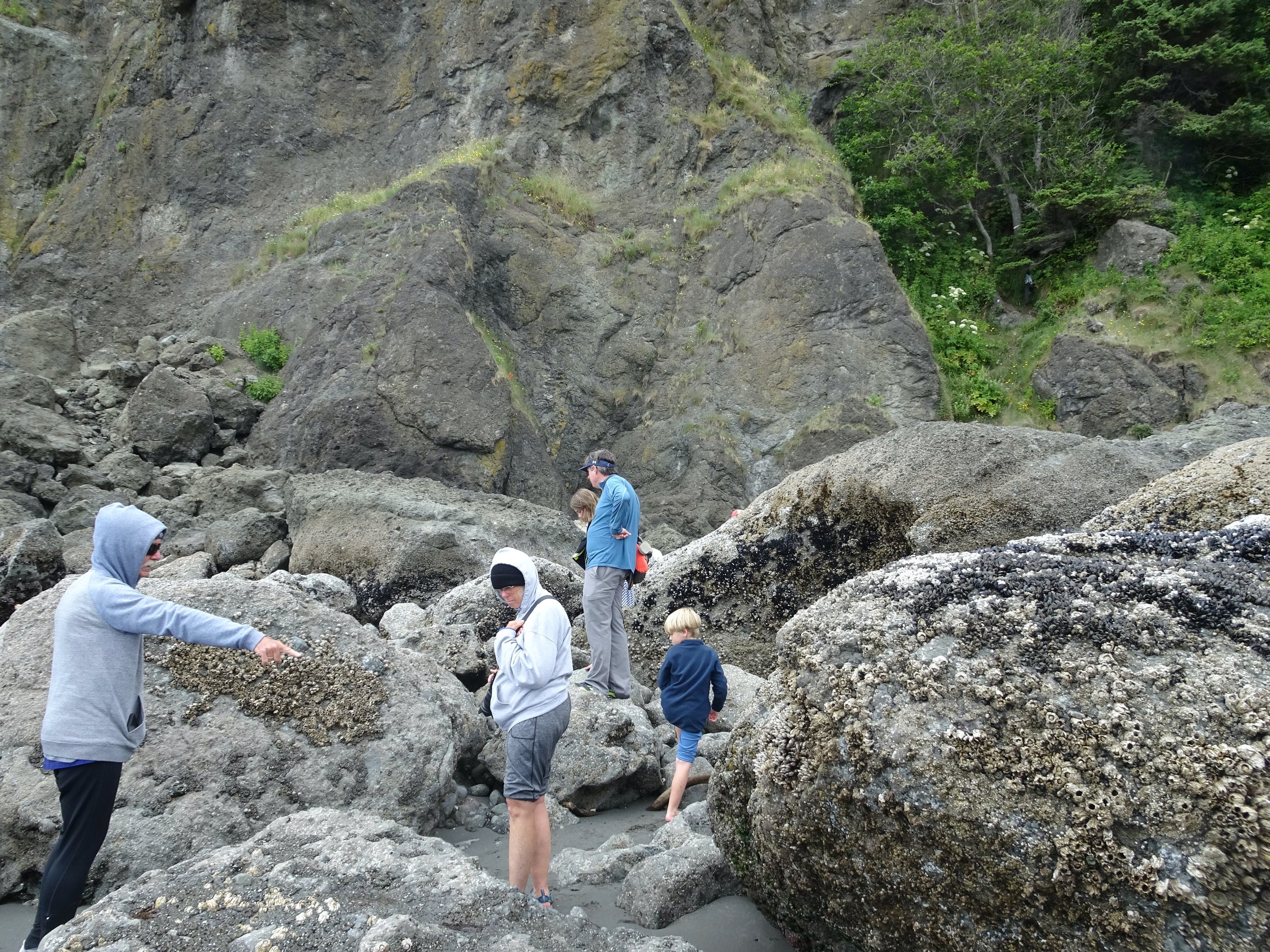 Here are some of the boulders we climbed on for greater access to additional views. Photo by Karen Boudreaux, 6/18/21 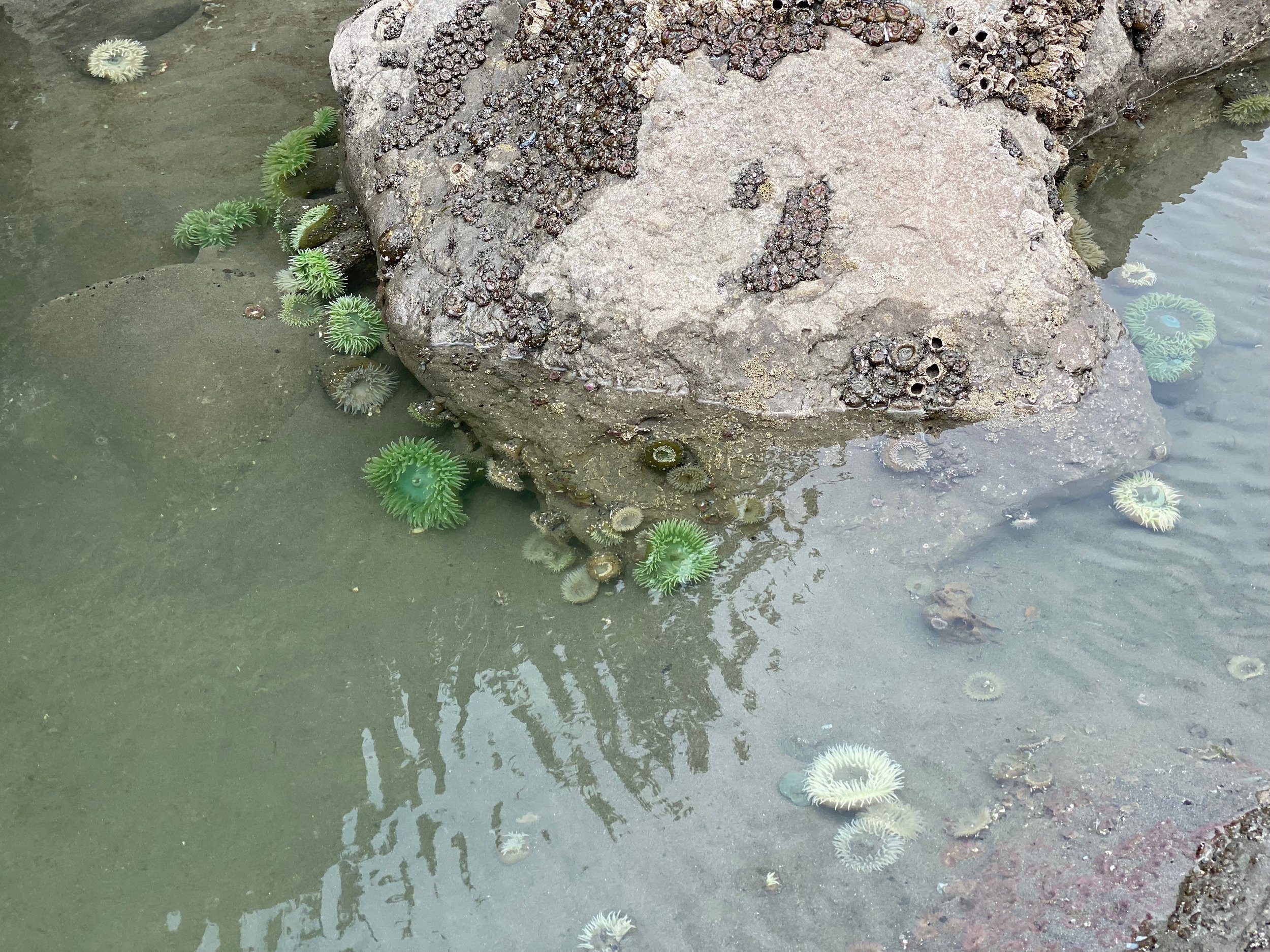 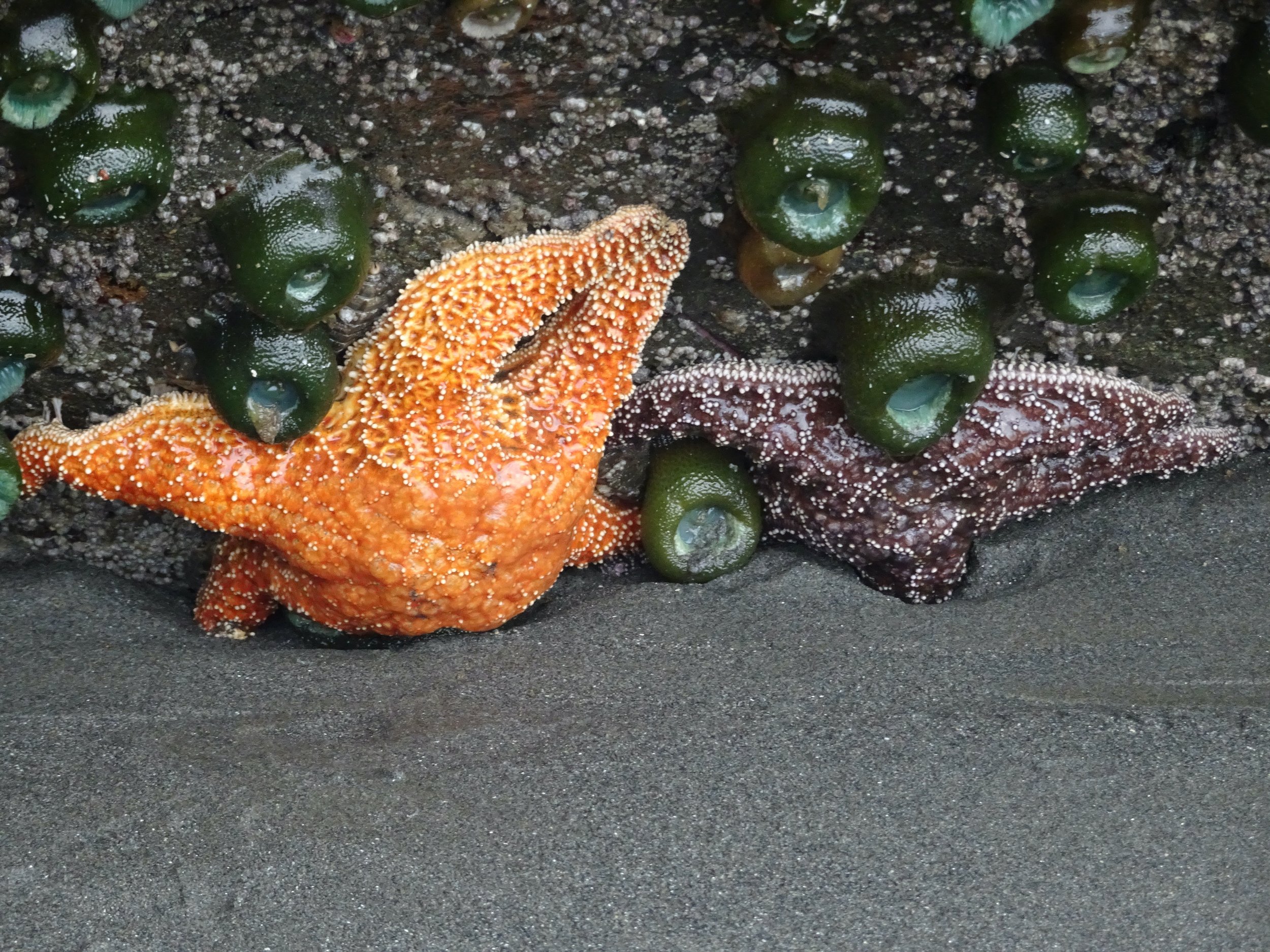 Cuddly sea star buddies lay along the ocean floor waiting for the tide to come back. Photo by Karen Boudreaux, 6/18/21 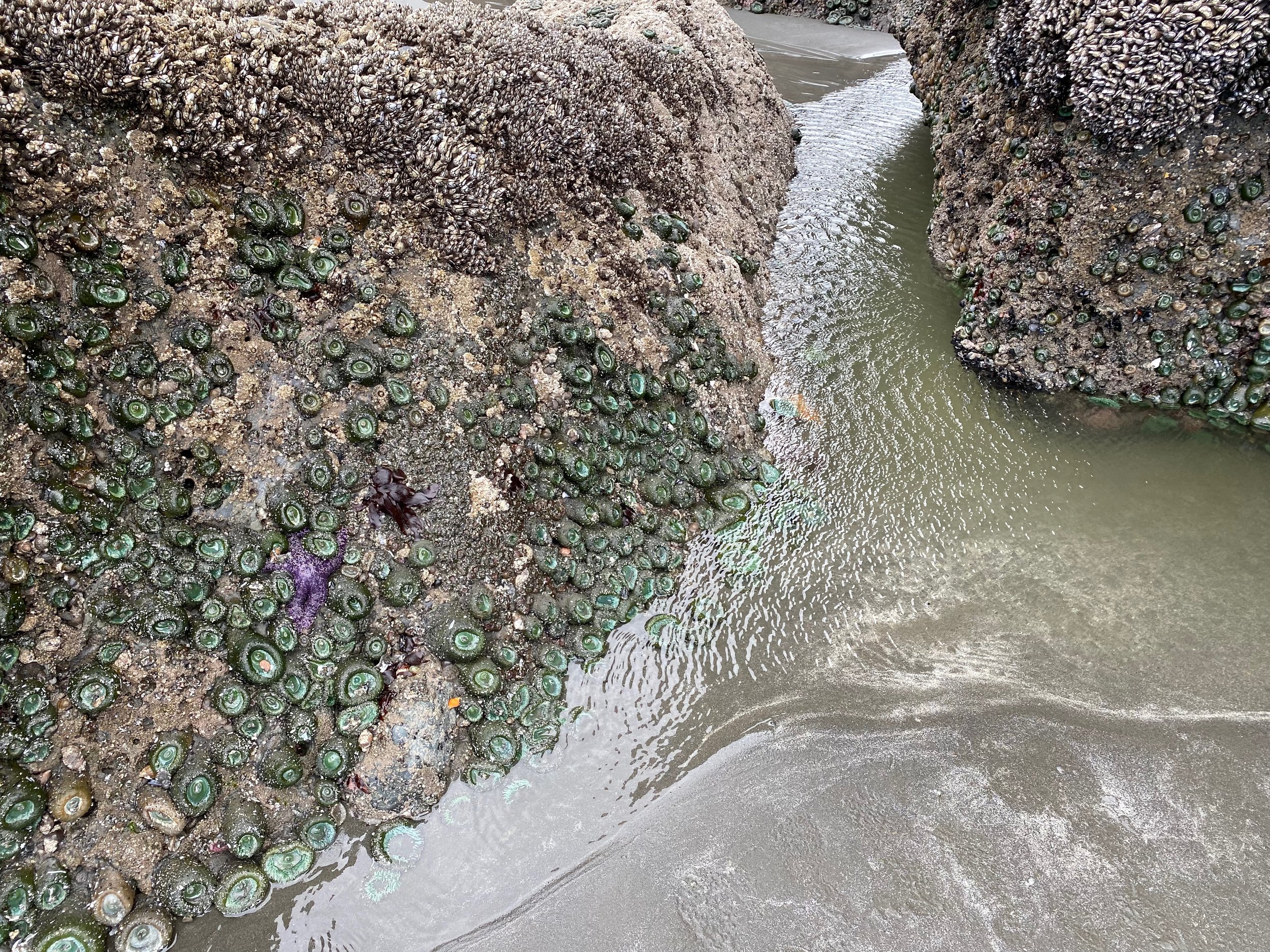 A tidepool river navigates through walls of sea stars, anemones, and muscles. Photo by Karen Boudreaux, 6/18/21 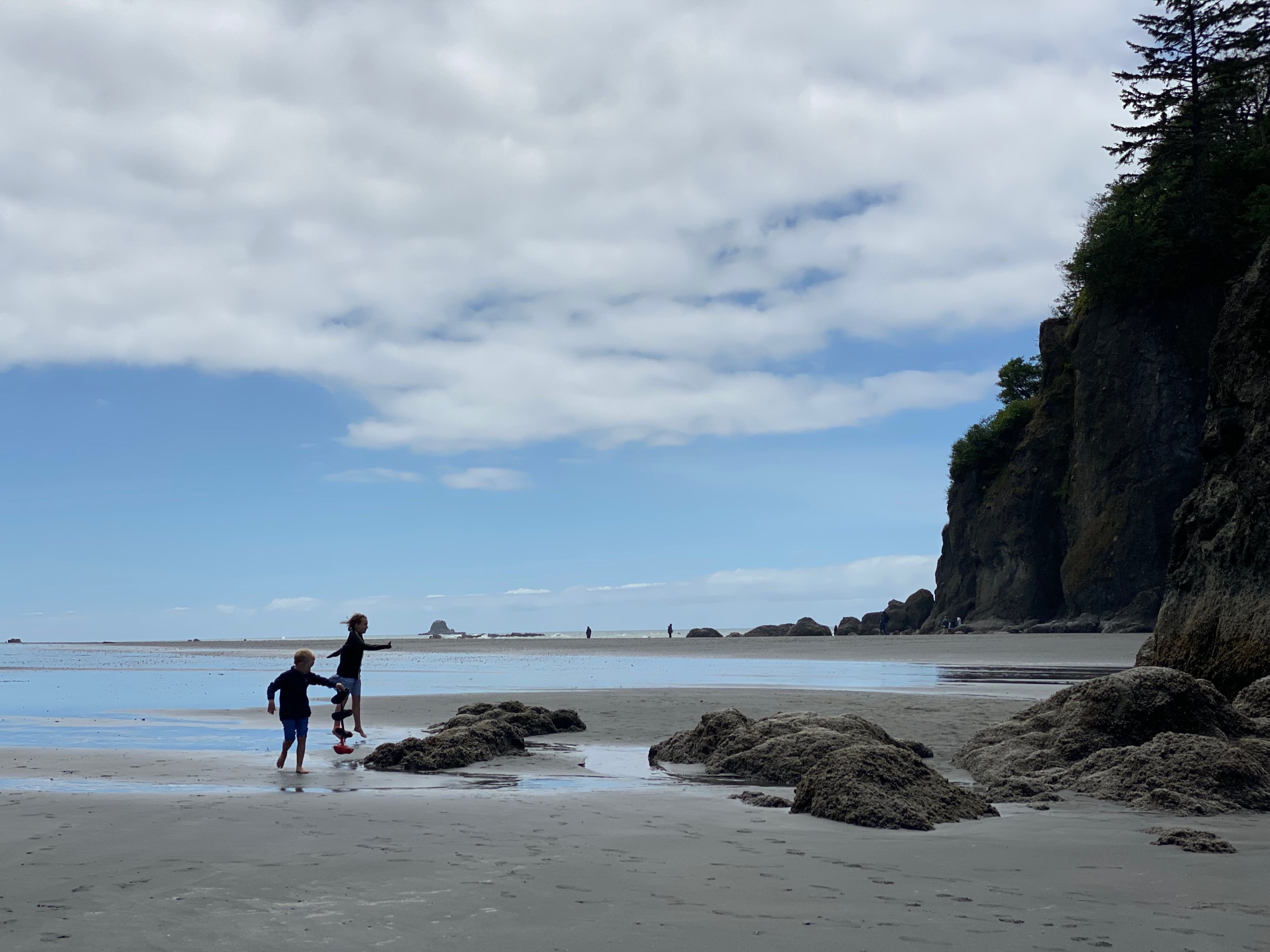 When the beach is smooth you can make a velcro rope of your water shoes and dance the afternoon away. Photo by Karen Boudreaux, 6/18/21